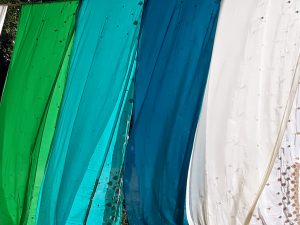 I am at “Into The Wild”, a kind of spiritual/ back to nature family festival where you encounter all kinds of ancient wisdom and crafts. You will see flint arrows being crafted, felting workshops, lots of dancing and drumming and a sprinkling of mumbo jumbo. You will be disappointed if you attend the Pussy Power workshop and hope to know more about cats.

Yesterday, as I bounced across a rain lashed field in the dark of a Sussex night, another bit fell off my old camper van, but it kept me dry all night if not particularly warm. A thicker double duvet is required if anyone would like to swap one for some art work.

According to Richard Creightmore, leader of the Earth Energies workshop, all our ancient churches are built on ley lines, the altar being situated in a particularly powerful place. The reason for this, he says, is two-fold. First we feel good at these spots because they are full of energy.  Secondly we feel bad at these spots because they are places where we unload our negative baggage.  Confused? I was. But I did think he made a good point about our ceremonial activities being a kind of cleansing for the area and for our nation. He continued by making some swipes about our churches being ineffective, unattractive and chauvinistic, which is easy to do if you ignore the dogged, underpaid clerical services that benefit millions of people in parishes up and down the country.  Easy also if you forget that these places of ley line power are attended with services and singing every week of the year. But why let evidence spoil your polemic?

So there I was with two bent bits of metal in my hands, walking across a ley line, and to my surprise the rods crossed, just as he predicted.  I missed the beginning of the workshop as I had been queuing for the toilet, a word that barely describes these stinking boxes whose steps you ascend in order to LOCK YOURSELF IN with the visible, fetid droppings of 6000 strangers. But I digress. I did not make those rods move, they moved on their own, so if you see me wandering the grounds of St Mary’s with bent coat hangers, you will know that I am testing out Richard’s teaching, and there may be a further blog on the subject.  Either that or I will be excommunicated and cast into the darkness where there is wailing and gnashing of teeth….a bit like being trapped in a festival toilet.