A culture disintegrates when old people don’t become Elders but are shuffled off into homes and forgotten, and the youth are rejected as a waste of space. Both feel isolated, suicidal and often live without purpose or meaning. Many young people say, “There’s nothing we can do, it’s gone too far and we are heading towards a hothouse earth. Everything is going to hell.” They perceive that previous generations who are supposed to care for their children, have instead committed ‘nepocide’, the crime of killing your grandchildren. The action at the Guildhall in Cambridge on Saturday saw Grandparents pour fake blood over the heads of the Grandchildren in a visceral and quite shocking demonstration of what this crime looks like in a mythically imagined way. The youth of today are staring into a future unlike anything we have ever conceived of before, but some of them are resisting despair. Some of them, without even knowing, are manifesting that old song, “we are stardust, we are golden, and we’ve got to get ourselves back to the garden.” They are digging deep into the roots of the earth and also finding that spark of creation that bursts into their imaginative inner life. They are connecting with each other, supported by the Elders and engaging in actions that create meaningful change to help heal the world. Our challenge is, how do we continue to awaken the Elders so that they can support and confirm the youth who are carrying within them the dream of the future? As well as tragedy, the environmental crisis carries opportunity to re-imagine a world where community welcomes both old and young, black and white, straight and gay, and all the other divisions that have alienated and separated us as one human species among many other species on our planet.

Orgiva 3rd February 2018
No Clothes, No Make-up, No Shame
I don’t know if this catches your imagination or not, but it is a fact that we see more images in one day than our medieval ancestors would see in a lifetime.  Go on, imagine that! I took a couple of selfies while I was in Spain. I wanted to see myself there, there in the mountains and walking the paths because I knew when I came back I would need to remember that I was there. It would be necessary to call on that woman who walked in those mountains and ask, “what would she do in this situation?” 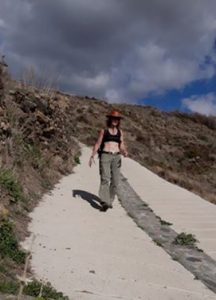 We think of selfies as a new invention but it turns out that the Pharoahs had them in their tombs, and our ancestors left hand prints in caves deep underground. Here is evidence or our lives. We existed! All things can get out of hand as is recorded in mythology when Narcissus, so in love with his own reflection that he couldn’t love anyone else, wasted away beside a pool of water where his beautiful reflection gazed up at him.  The Gods had mercy on him and turned him into a flower.
But there came one night when, for a mad moment I thought about taking a naked selfie and posting on on Facebook entitled, “no clothes, no make-up, no shame!” Thankfully this impulse was quenched by the thought of my sons coming to terms with a naked image of their Mother on Facebook. However, behind the impulse was the furious outrage that our culture considers older women no longer good to look at. And I thought of those riven faced men who sport scars on their faces and bodies.  They have conquered, they have killed and overcome and we value their chiselled looks!  Women on the other hand, we have brought life into the world and the marks on our bodies are from carrying and bearing new life. We are bearers of the future, of generations, we nourish and sustain a tiny seed, then in anguish, sweat and blood, labour to bring this life through our own bodies and into the world.  The marks we carry as mothers and elders, are considered ugly by a society obsessed by youth, and brainwashed by images mediated by interests other than nourishing human well-being. We must inhabit our bodies, no matter what shape we are in, and give thanks that we are, that we exist and for some of us, that we have given life and it has left its beautiful, beautiful mark upon us.